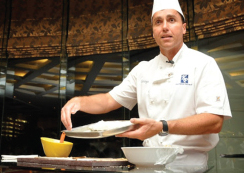 Come on down to the Perth Glendi Greek Festival and watch this great line up of cooking demonstrations.

The ‘Cazzie Cooking Classes’ commenced on Saturday, 11 June 2011 through the Castellorizian Association of WA. Sweets traditional to Castellorizo have been made plus other Greek sweets and savoury dishes at the classes. It’s exciting and very rewarding that so much interest has been shown. From the classes a very popular recipe book, FROM OUR GREEK KITCHEN TO YOURS was launched recently and is available to purchase at this year’s Glendi from the ‘Castellorizian Zaharoplastia’ – Greek Sweets marquee.

George Diakomichalis is a fourth generation Greek Pastry chef who heads the multi award winning business Kalymnos Pastries in Adelaide, South Australia.  He opened KP after he completed his training back in 1995 under the guidance of his grandfather and two uncles at his family’s patisserie over in Kalymnos, Greece.  The first patisserie was established in Kalymnos by George’s great grandfather in 1918, which is still currently operating.

George’s goal is to help keep traditional Greek recipes alive and to inspire future generations.  He loves travelling this beautiful country of ours as well as other parts of the world whilst sharing the knowledge handed down to him from the generations above.

George believes we live in the best country in the world.  It allows us to keep the traditions of our greek heritage alive whilst living in this wonderful country Australia.

He has been the regular face on the dessert segment of channel 7’s popular TV series ‘Out Of The Blue’, cooking traditional Greek desserts and adding his own unique twist to products regularly featured on the show.

George can’t wait to cook up a storm at this year’s Perth Glendi Festival and looks forward to meeting you all there. 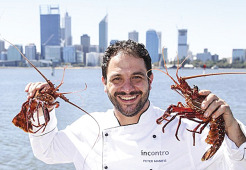 Peter has cultivated a genuine love of food over many years of cooking, fishing, foraging, learning and educating. He loves nothing more than inviting food lovers into his world to see the story behind WA’s most beautiful and delicious produce and serving it up in his signature family table style.